What’re the routes like? Which lakes we're talking about

You can see all the road cycling routes in the Italian and Swiss Lake District on Google Maps.

We are talking about Lake Maggiore, Varese, Lugano, Como.
Nestled in the Northern Lombardy and at the foothills of the Swiss-Italian Alps.
A short 40 minute ride to Malpensa airport and a short 60 minute ride to Milan.

The most equipped, enjoyable and flexible road cycling area in Italy (1,600 km – 1,000 mi). The routes avoid the busier roads and there are sections of cyclepath.
Such cycling routes (flat, undulating, climbs) enable you to be flexible in changing the schedule and the roads to suit what you need to explore the Italian-Swiss Lakes.
So this means that you can get the most out of your cycling experience.

We’ve added Google Street View to the cycling routes map.
You can take a look at it without signing up or logging in.

Click Pegman. Then, drag Pegman to the route that you want to explore. So you can see real-life pictures of the roads comprising the cycling routes, long before you get there yourself.
However it possible on your laptop only.

The cycling routes in the Italian-Swiss Lakes are winding

You'll take on lots of ups and downs, hills, cols and densely wooded routes in Northern part of the area, at times through tiny and secluded villages, some with cobblestones paths, others with roads wide enough for one car only.

The road cycling area offers a unique mix of charms

The road cycling area, with its ten lakes, offers a unique mix of charms to lovers of cycling and a perfect blend of climbing and descending, of challenge and reward. The four most important lakes are Lake Maggiore, Lugano, Varese and Como. 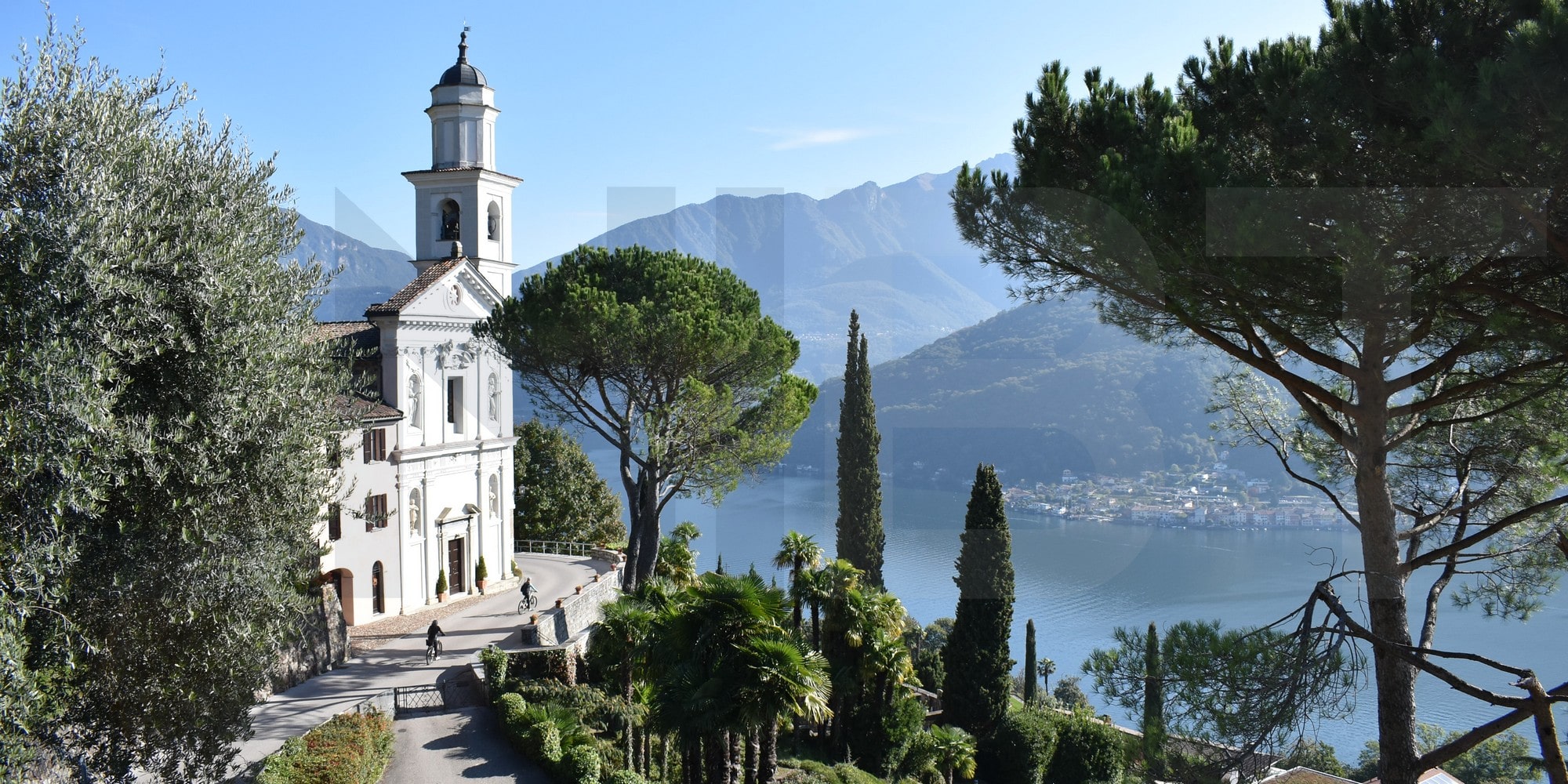 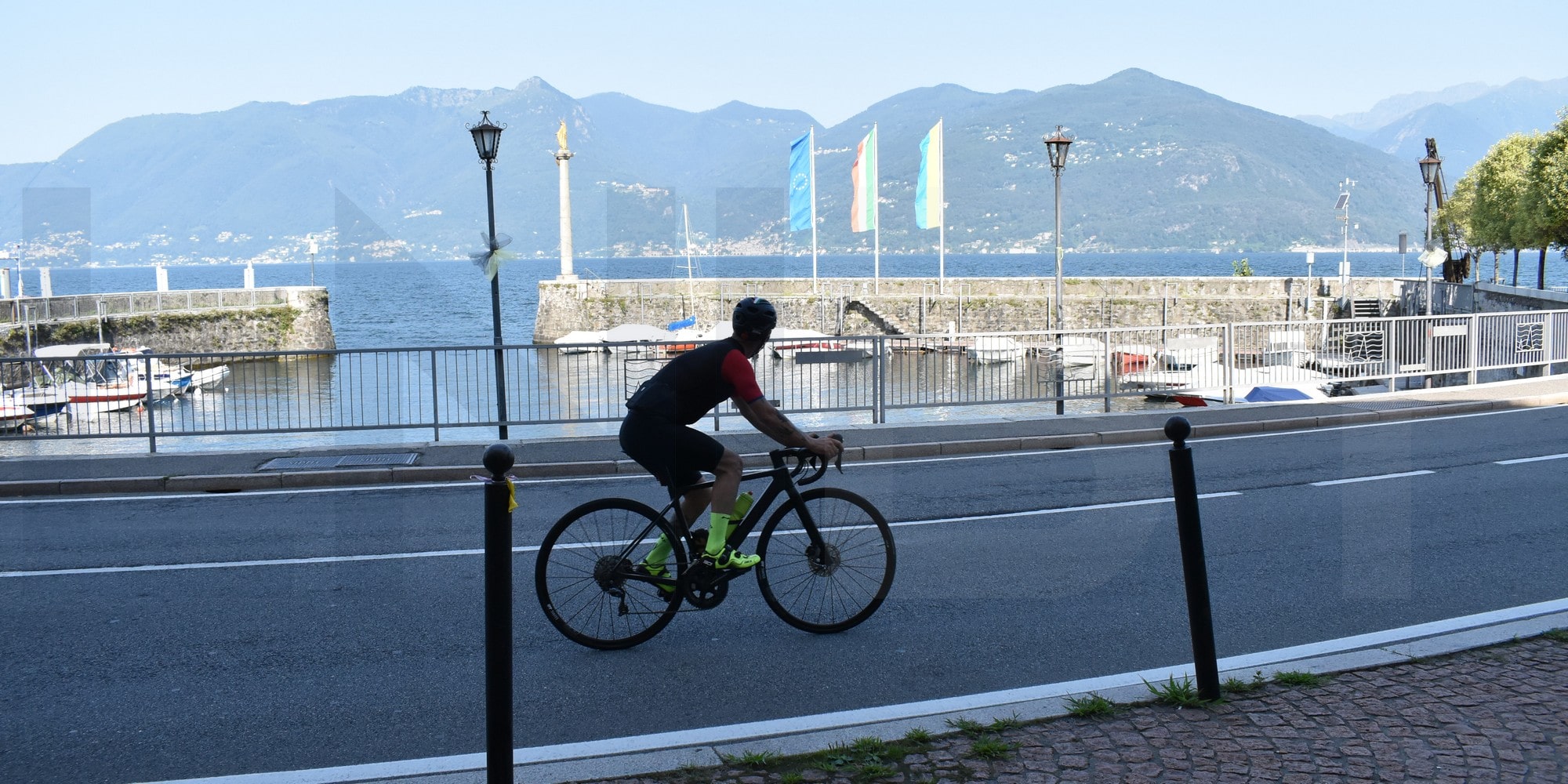 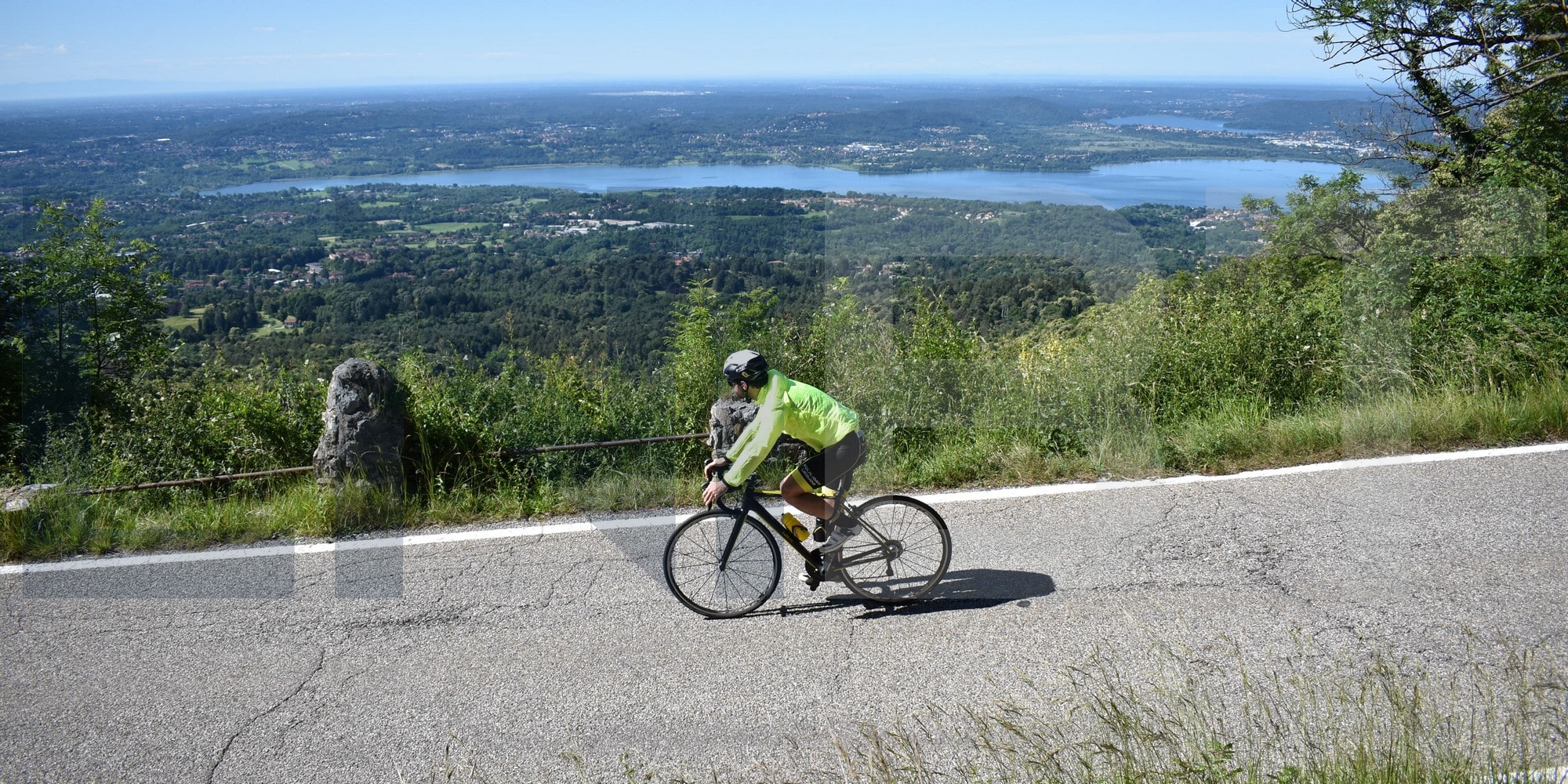 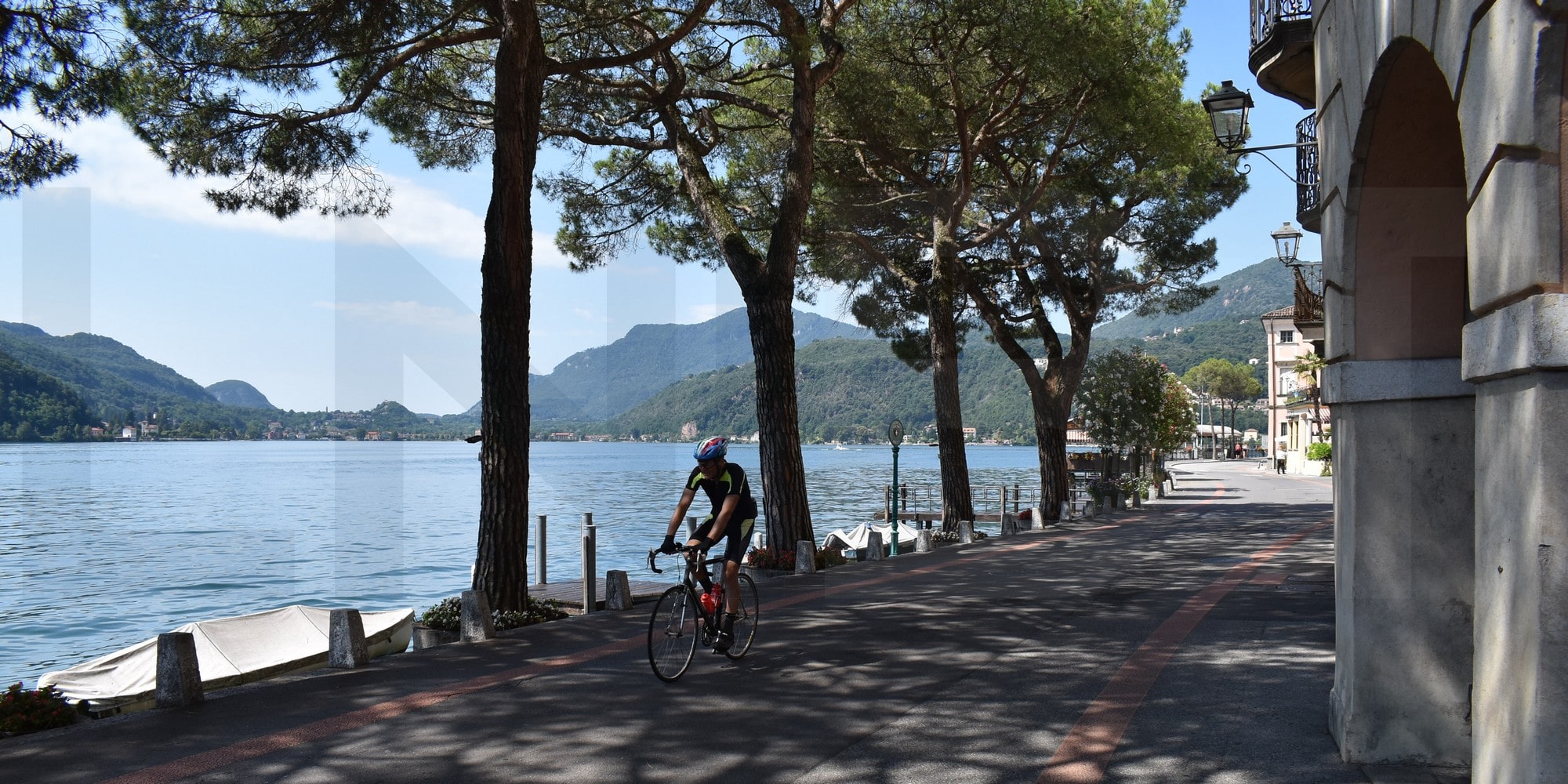 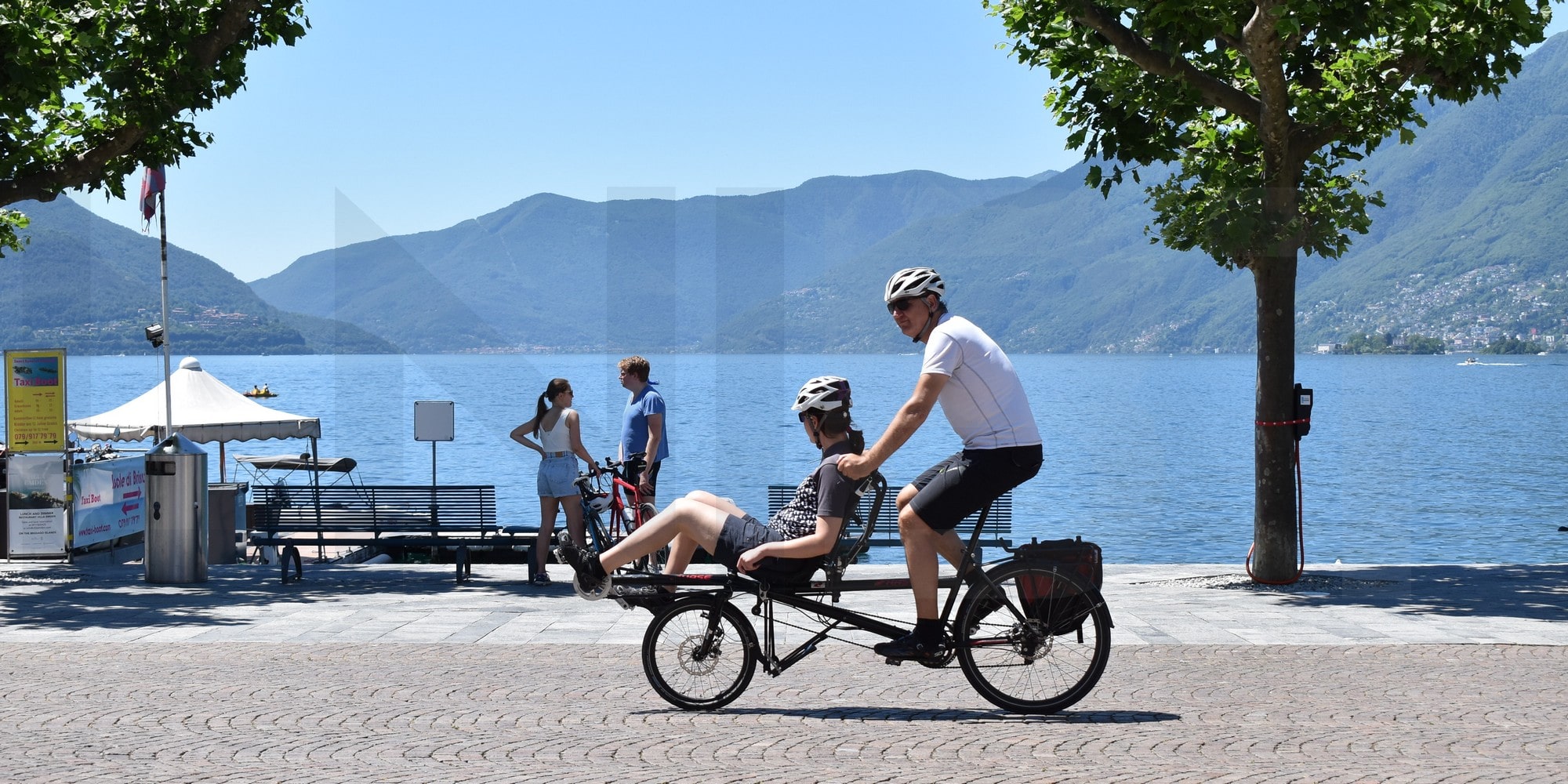 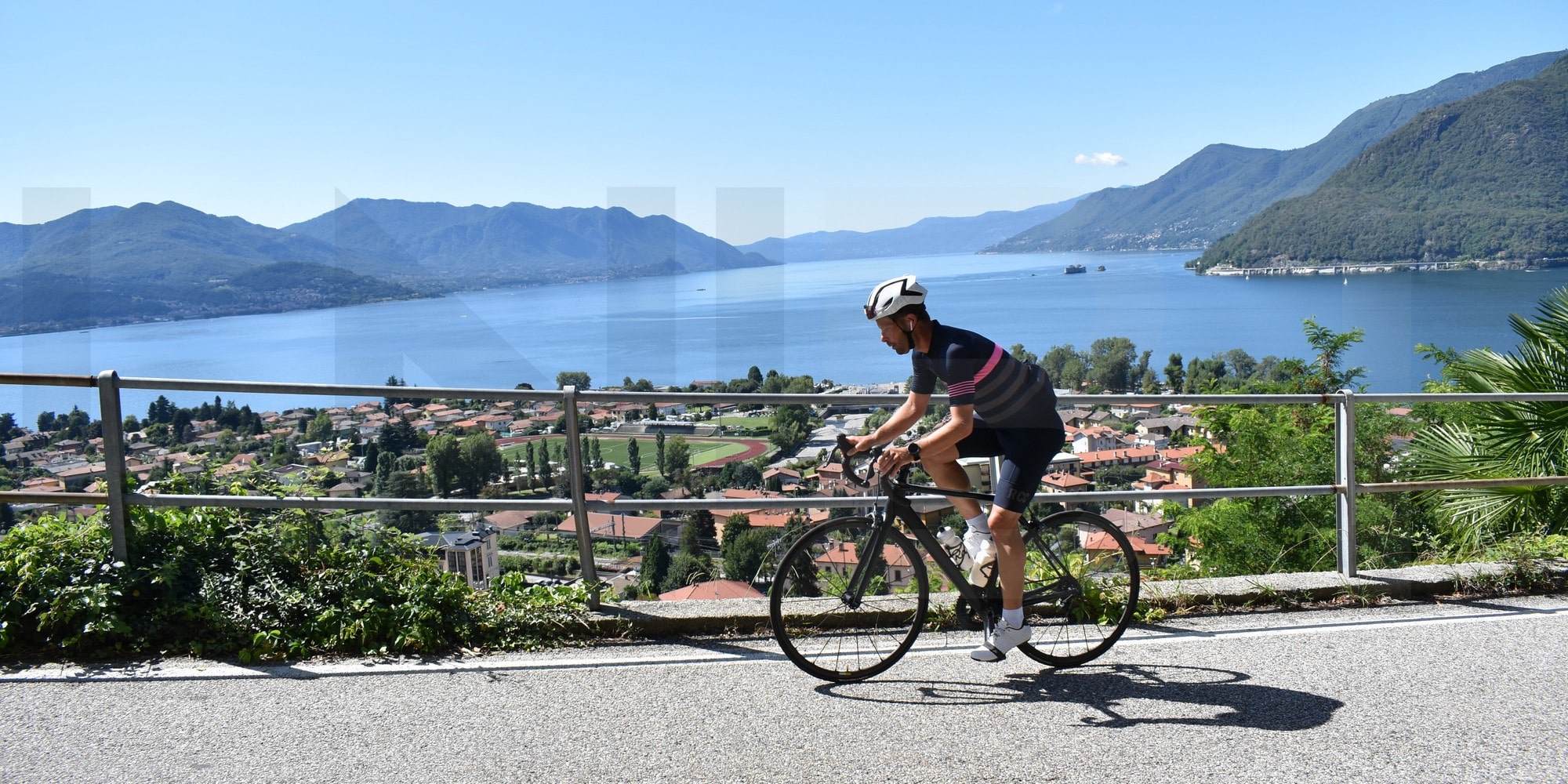 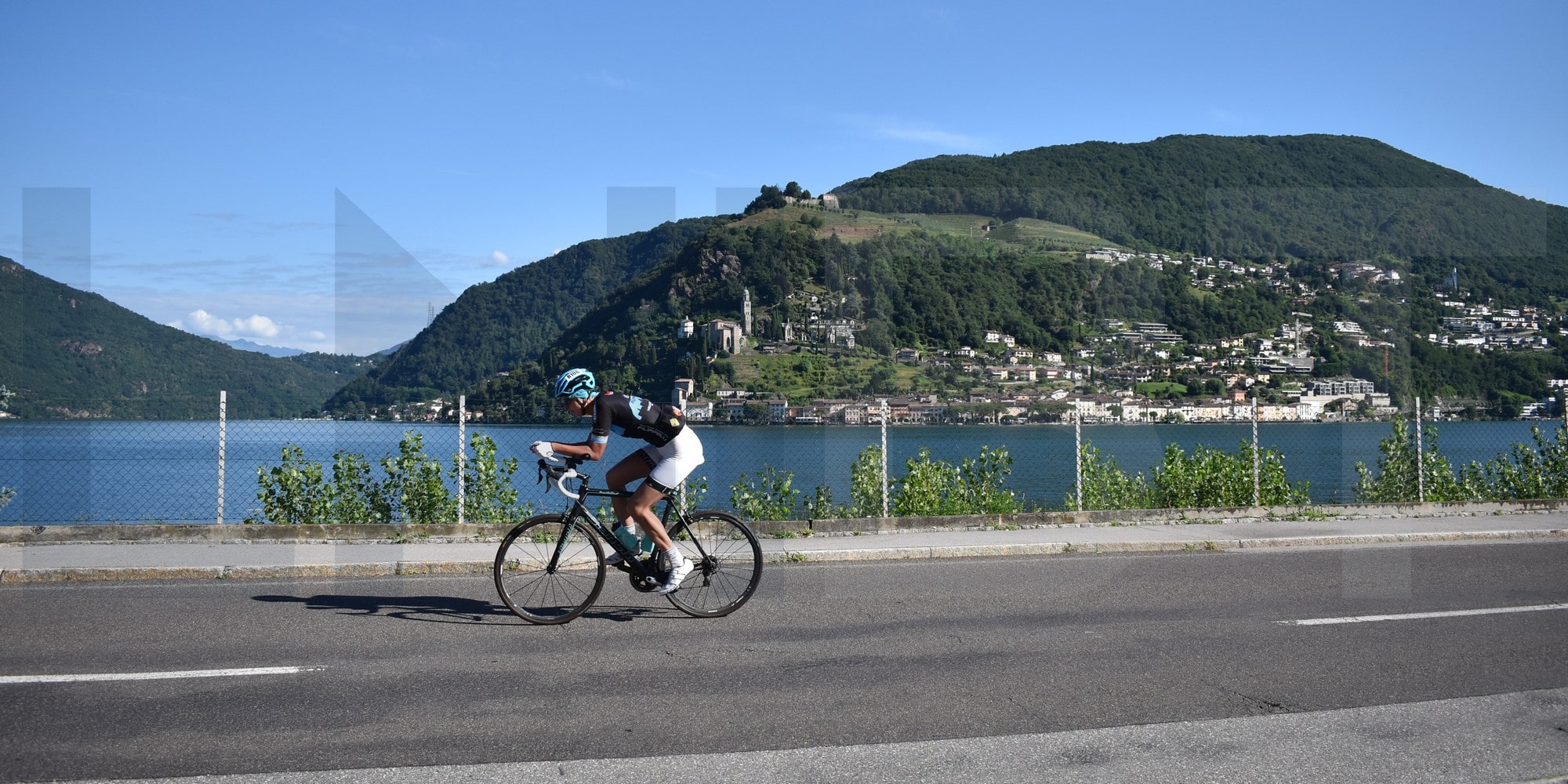 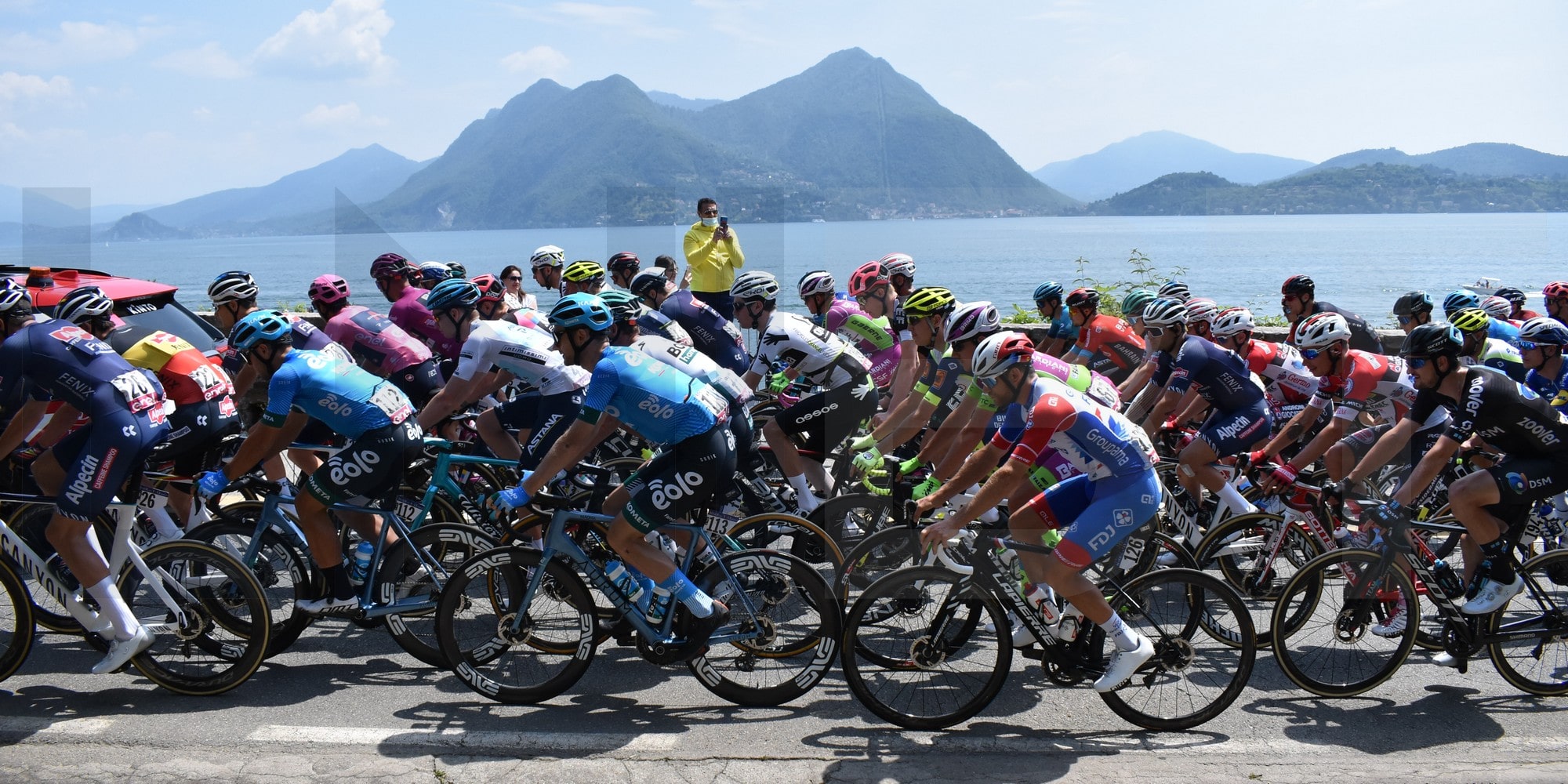 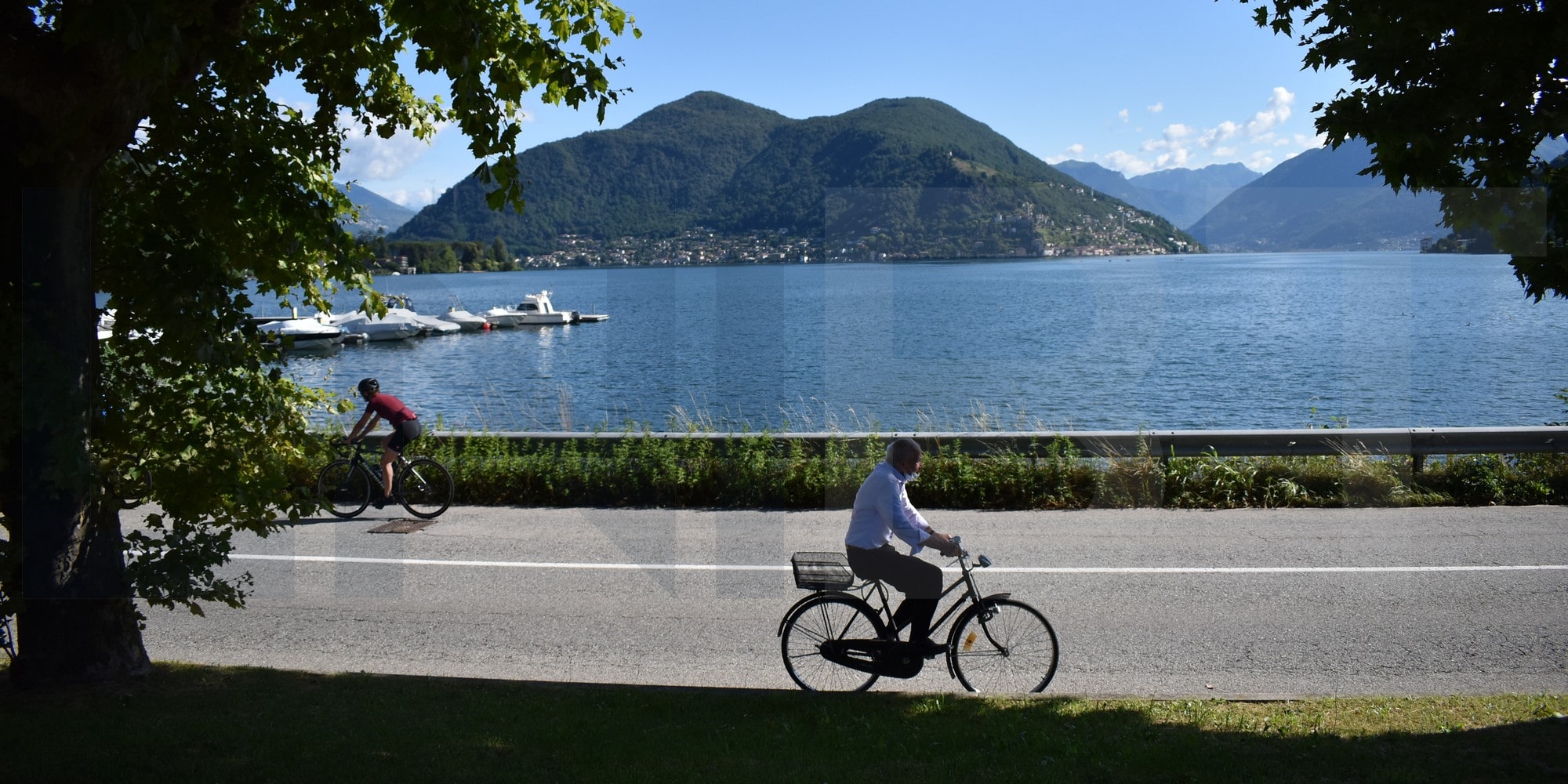 There are plenty of lakes all over Italy, but here the phrase refers specifically to an area in the north, where a string of narrow glacial lakes lies interspersed among the Prealpine foothills, straddling the border with Switzerland.
The Road Cycling Area lies among Lombardy (Italy), Piedmont (Italy) and Switzerland. It’s framed by the Alps: you can see Mount Rosa (4.637 metres – 15,213 feet), the second highest mountain of the Alps after Mount Bianco (4.808 metres – 15,774 feet).

Between and around these are several minor lakes - such as Lake Orta, west of Lake Maggiore, and Lake Varese, midway between Lake Maggiore and Lake Lugano, as well as countless tarns trapped in the high valleys: Lake Brinzio, Lake Ganna, Lake Ghirla, Lake Comabbio and Lake Monate.
Ten lakes of different sizes surround Varese and Como.

The distance between Lake Maggiore and Lake Como doesn’t exceed 70 kilometres – 45 miles as a crow flies.
The southern end of the area is relatively flat (approx 300 metres .a.s.l. – 990 feet a.s.l.) and more peopled, but the northern end is hilly and mountainous ( the peaks are approx 1.000 metres a.s.l. - 3,280 feet a.s.l. or more) as the lakes reach the foothills of the Alps in Switzerland.

The region has a typically hilly and mountainous landscape and therefore the tour profile is characterized by a continuous up and down. You can takle short climbs from 2 km to 5 km, or longer and tougher climbs.

You’ve probably never heard of them, but there are some massive and excellent climbs in the area. We have put together a selection of the the major climbs close to Lake Maggiore and Lake Lugano.

The Italian and Swiss Lake District has some of the best training roads for cyclists because there is so much variety.
The lake roads are flat and there are many roads up in the mountains for climbing.

If you love an easier and slow cycling we also planned itineraries where you can avoid any big hills and medium sized hills too. 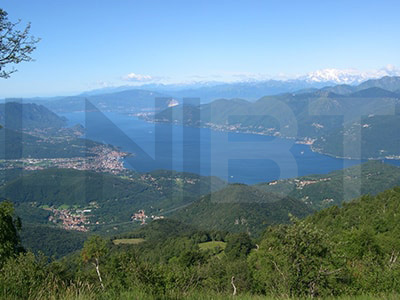 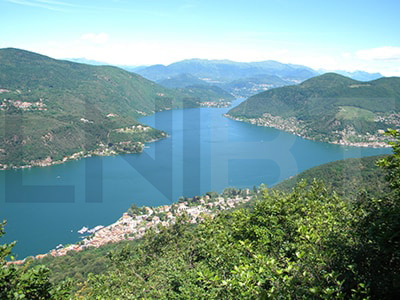 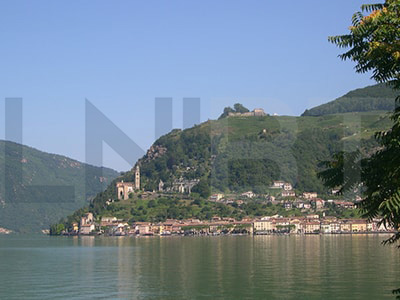 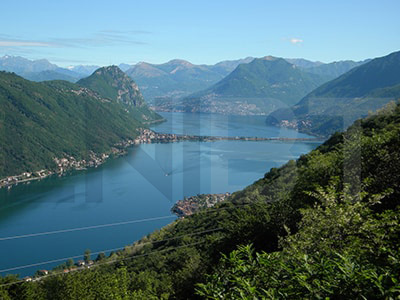 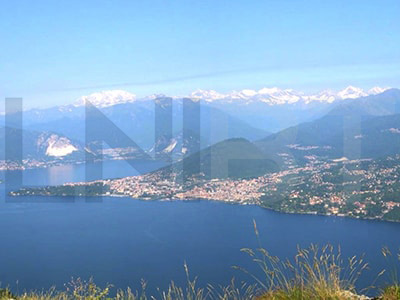 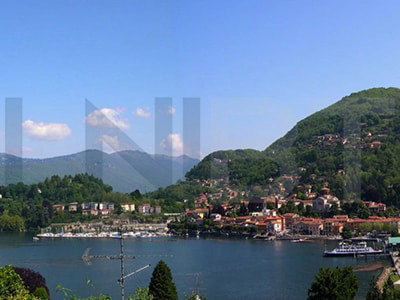 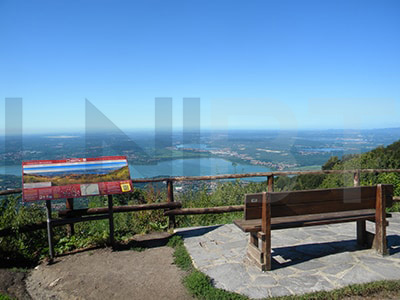 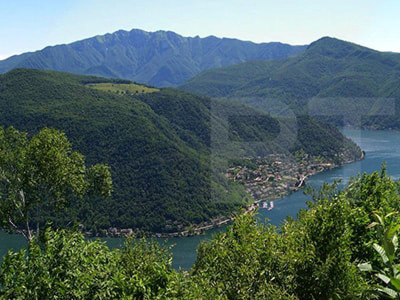 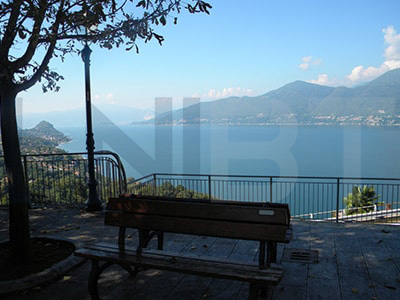 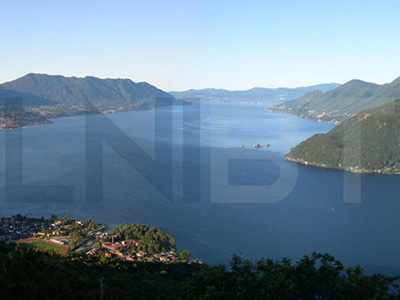 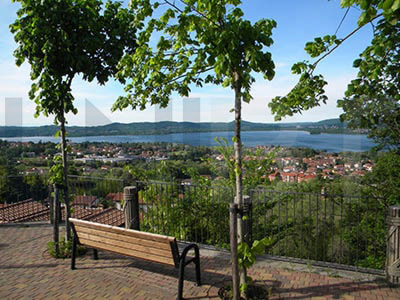 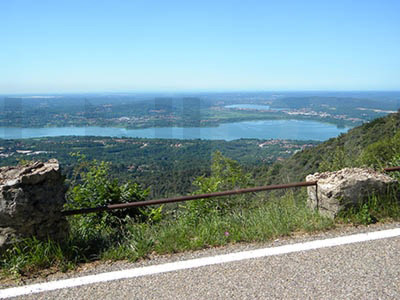 Some say the ancient village of Orta San Giulio, on the eastern shore of Lake Orta, is one of the best lake villages: largely traffic-free with medieval buildings, narrow cobbled streets, flanked by old stone walls with doorways topped with triangular architraves.

In the middle of the Lake Orta lies the San Giulio Island. You can take a boat from the village of Orta San Giulio to the picturesque Island of San Giulio, dominated by its Romanesque church and an ancient monastery.

On the western shore of the lake lies the Sanctuary of the Madonna del Sasso. It rises in a panoramic position over the lake.

A small part of Lake Maggiore is in Switzerland (towns of Locarno and Ascona) but most of it is in Italy. The main area on this lake is centred around the grand resorts of Stresa and Verbania (which is the union of two towns: Pallanza and Intra) and the famous three Borromean Islands (Bella, Madre and Superiore) that lie between them. Stresa is surrounded by elegant villas and beautiful gardens.

From Stresa, the main town, a cable car ascends to Mount Mottarone (1.491 metres - 4,892 feet ) – a playground for mountain biking, rock climbing and hiking – or just for drinking in the breathtaking views. The three Islands in the middle of Borromean Gulf and the towns and on the lake can be visited by boat with frequent ferries. Learn more: Navigation on Lake Maggiore.

Lake Varese lies at the foot of the Regional Park of Campo dei Fiori while the Alps, dominated by the majestic profile of Mount Rosa, provide a splendid backdrop. Lake Varese is 5 kilometres – 3 miles far from the city centre of Varese.

28 km - 17 mi is the length of the cycle path that surrounds Lake Varese. Occasional uphill sections, which are never demanding, make the route accessible even to less fit or experienced riders. It isn't suited to faster riders because it's winding and frequented by pedestrians too.

Parts of Lake Lugano are in Italy but most of it, including the town of Lugano, is in Switzerland.

The lake has a number of different branches and is surrounded by mountains: Monte Generoso is the highest mountain by Lake Lugano (1.704 metres - 5,590 feet). At the southern end of the lake lies Capolago station with regular departures up to the top of Mount Generoso where on a clear day it is possible to see Milan as well as Lake Maggiore and Lake Como.

This is perhaps the most famous lake of all and the best way to see it is either by boat or by bike from the top of one of the viewpoints. Its characteristic shape, reminiscent of an inverted Y, results from the melting of glaciers combined with the erosive action of Adda river.

This led to the formation of the two southern branches, in the midst of which there is the village of Bellagio.

The triangle of land to the south of Bellagio offers one of the most well-known cycling place of the Italian Lakes. Climb up on your bike to the Shrine of Madonna del Ghisallo the Patroness Saint of cyclists. Inside the tiny church you will find all sorts of cycling memorabilia including bikes from the classic races neatly pinned to the walls.

And if that wasn’t enough, right beside the church is a modern museum dedicated to cycling.